Skip to navigation
Bring Your Vision to Life Get Started

Now that the global pandemic is easing, it is high time to make our long-delayed peace overture toward the aliens of the Pleiadian star cluster. No one is more aware of this than inventor John St. Clair. His patent application for his invention of a “remote viewing amplifier” remains woefully suspended in the dank bowels of the U.S. Patent and Trademark Office file rooms.

There is no time to waste if we are to save our planet, thanks to the dithering of the Patent Office. In fact, as St.Clair’s patent application makes clear, the battle of Revelations could start at any moment. As a thoughtful substitute for the mind-numbing specifications of the invention in a typical patent, Mr. St. Clair gives us critical insight into the opening salvos of this interstellar conflict.

“Moving to a larger picture of things that are happening in the galaxy, I was able to make contact with the Pleiadian Federation which is located about 400 light years from earth....the Intelligent Insect Beings [one of the Pleiadian groups] are the ones who fly the black triangles over Belgium and France for the purpose of evacuating human beings back to the Pleiades for relocation on a planet called Earth II. The reason for this evacuation was...the [upcoming] battle of Revelations, which would take place [around 2008-9].”

Thank God we’ve now cleared up that Belgian thing. They’ve been waffling for years over what those darn black “spots” spinning in the sky were, what with the occasional gamma death-ray bursts and all.

Everybody knows – and Mr. St. Clair is no exception – that the patent application has to indicate the importance of the invention. How it advances the cause of Science, or at least why dipilating cat fur 30 seconds faster is a good thing. Remote viewing is the capability to harness human energy to project one’s spiritual eye to distant locations light-years away, in various dimensions of the universe. Like a day trip to Berkeley. The inventor, for instance, hit it off hugely with the Admiral Third Class of the Pled Defense Department by demonstrating his ability to instantly communicate with him at a distance of 90,000 light-years.

And that, ladies and gentlemen, is why this invention is so super important, because, in Mr. St. Clair’s solemn words, “one day it will mean we can become a vital part of the Pleiadian Federation.” And therefore save our planet through benign enslavement.

As almost an afterthought, St. Clair describes the invention. Although he leaves out any claims, which is usually a killer on our planet, I don’t think the patent examiner will hold that against him. It’s pretty much your standard projection of the spiritual eye module through hyperspace, by diffracting across two plates of common plexiglass at a Subway® restaurant, thus connecting to the tetrahedral geometry of subspace.  Here’s how I see it: 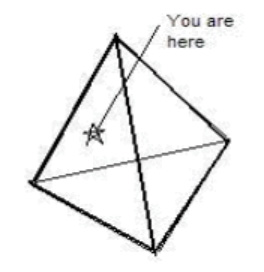 Me, I remain a skeptic. Aside from novelty products for voyeuristic teenage boys to sneak incorporeally into bed- and locker rooms, I see no useful commercialization in the near term. But, no doubt our trademark lawyers can make a few bucks registering such trademarks as Eye Spy®, IC-You®, VoyYour® and InJoy the View®, at least until the recession, well . . ., recedes.

Caution: Avoid risky behavior when reading this report. The ingestion of food and intake of air through tubular probes is associated with decapitation in abducted laboratory human subjects, which in some instances may prove to be fatal.